From June 16-21, 2018, George Eliadis (NFA Main) and Matthew Karwan (NFA North) represented Newburgh at the National Speech & Debate Tournament (Nationals) in Fort Lauderdale, FL. They were considered part of the top 3% in the Nation. There were over 4,000 students from America and 16 other countries. In the branch of Debate that they do, Public Forum, there were about 580 students. Although they did not make it into the top 15, they did a great job. This is their first time at Nationals and both have only been debating since last year.

The Debate Team is advised by Mrs. Jonelle Formato-Santo.

The experience from the view of each student.

Matthew Karwan, sophomore, NFA North:
Debate. It combines research, analysis, communication, and reasoning in one of the most competitive fields found in schools across the world. That is why I am more than honored to have represented the Hudson Valley District in perhaps the apogee of competitive debate, the National Speech and Debate Association’s National Tournament. My partner and I eagerly left our hometown of Newburgh, New York to face off against premier debate teams from all across the world in sunny Fort Lauderdale, Florida. The topic was “Resolved: On balance, the benefits of United States participation in the North American Free Trade Agreement outweigh the consequences.”, meaning that we were to weigh the benefits of US involvement in NAFTA against the consequences. Countless hours went into researching the impacts of NAFTA inside and out, in order to prepare a case for both the affirmative and negative sides, along with blocks to any argument we came across. We received support from school administrators, teachers, parents, friends, and other fellow classmates along the way. At the tournament, we came across fierce competition from teams that came from all around the world, including Shanghai, China, to Portland, Oregon, to Kansas City, Missouri, and everywhere in between. Besides competing, our team also had time to visit the beaches, swamps, and other beautiful attractions Florida had to offer. The experience I had debating at Nationals for the first time was invaluable and one I won’t forget. Debate has exposed me to a diverse set of opinions and has made me very open-minded. Debate in itself has instilled in me lessons and values that I will use for the rest of my life. All in all, Nationals at Fort Lauderdale was a great learning experience and I look forward to working hard to qualify for the 2019 NSDA National Tournament in Dallas.

George Eliadis, sophomore, NFA Main:
The National Speech and Debate Association’s National tournament is the pinnacle of all things debate. The process actually began months before the tournament was due to be held. After first qualifying in the event of Public Forum at the Hudson Valley District tournament, my partner and I began preparing for what has insofar been the highlight of our high school debate careers. This month’s Public Forum topic is, “Resolved: On balance, the benefits of United States participation in the North American Free Trade Agreement outweigh the consequences.” Personally, I believe that this month’s topic was an interesting choice due to the diverse range of arguments surrounding it. My partner and I began the process of brainstorming and researching just days after the topic was announced. When competing at such a high stakes tournament, the usual amount of preparation doesn’t cut it. For this tournament, we had to understand the effects of NAFTA inside and out, while conducting much analysis. The most time consuming part of the process was continuously editing the 140 page word document of blocks to ensure that we were prepared for any argument that came our way. When the day finally came, we were ready. Having a nervous edge is pretty common before a debate tournament, however deep inside I was confident. Of course, after landing in Fort Lauderdale, the work began again as we thought of more and more possible arguments to use for our rounds. Now debate rounds are nothing new to me but when we were waiting outside the classroom for the first flight of our 9AM round on Monday, I must say we were a bit apprehensive, after all this is the top tournament in the nation. However, the confidence that I brought with me from hundreds of hours of research and practice was soon to shine through. In our first round, we debated an international team from Shanghai (there were several international teams in attendance), and we pulled through a great round. We negated the resolution in each of our four rounds during the first day. For our fifth and sixth rounds on Tuesday, we happened to be affirming the resolution. After hours of anxiously waiting, they announced who cleared the break to join the top 60 teams in the nation. Although we did not break (a very hard feat for first time qualifiers, especially sophomores), we did indeed win one ballot, which gave us joy in that we had been competing with America’s, in fact the world’s for that matter best debaters. All in all, going to Nationals with my team was an all out amazing experience that I will not forget. Aside from being extremely fun, whether it was the evening on the beach in Fort Lauderdale, the day in the Everglades, or walking down Las Olas Boulevard a few times, this experience shaped me as both a debater and a communicator. Being that I am the second speaker on my team, I gained invaluable experience for presenting rebuttals against strong cases with solid links and heavy impacts. I gained critical skills for the real world when dealing with professionals. I was able to make great connections for the future. This is what debate means to me, it’s a way of looking forward. Debate is a means of communicating intellectually with others on a deep level. Debate sharpens your logical and rational reasoning abilities, two skills that are crucial in today’s competitive and ever changing world. For those thinking about joining debate, all it took me was two years to qualify for nationals. If critical thinking with some really fun tournaments sounds appealing, debate is for you. You'll return home with an arsenal of skills and a lifetime of memories. 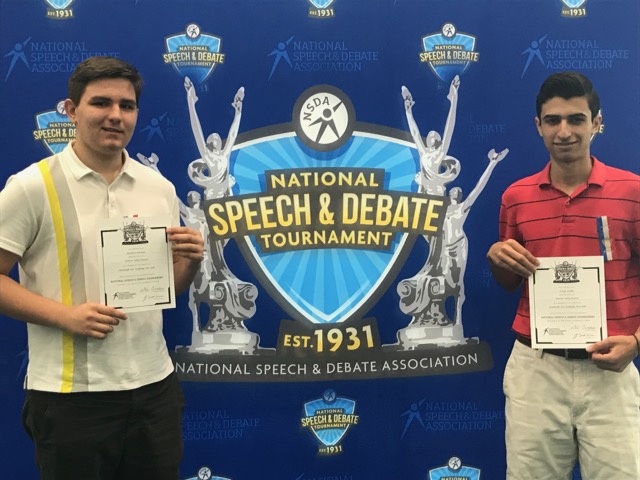 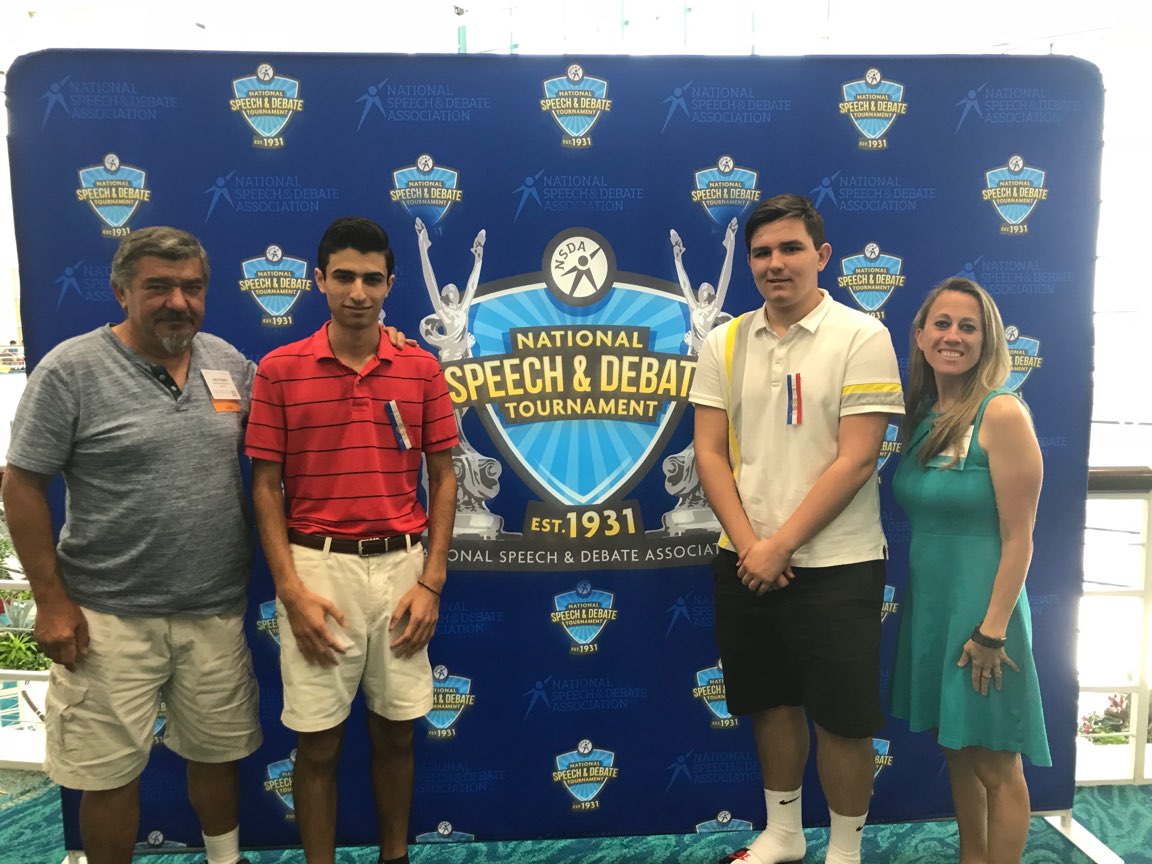 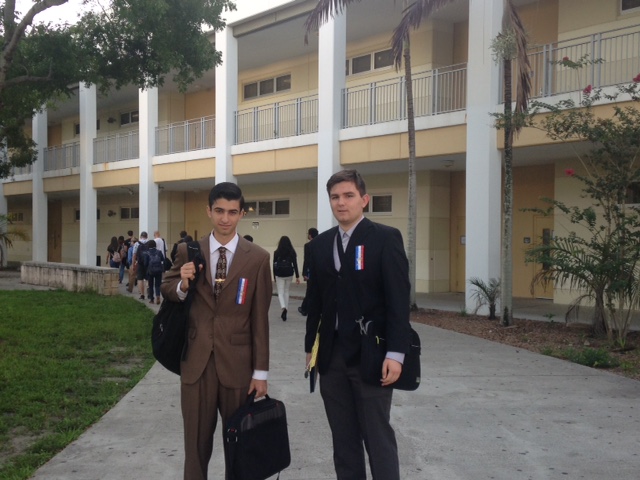 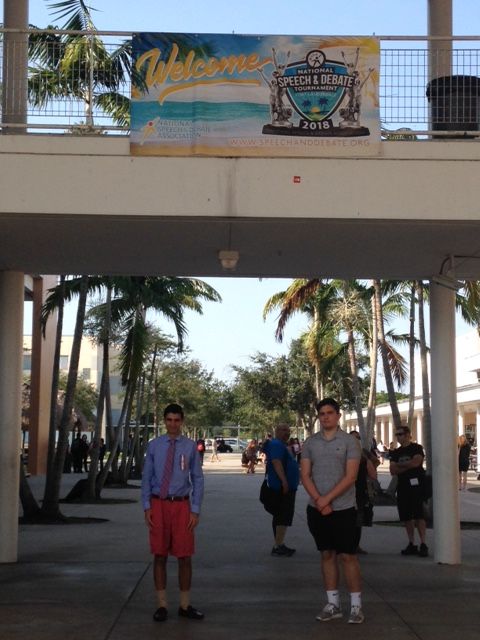